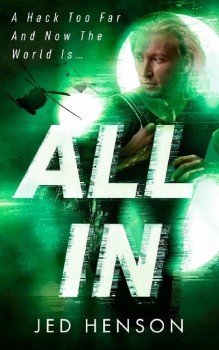 Hacker vs. Super AI
During a routine corporate security job, hacker Jim Ericssen accidentally steps on the digital toes of something he’s never “met” before: a powerful, malevolent, artificial intelligence, buried deep in cyberspace. He probably could’ve survived just fine. All it would take is an apology and a promise of silence.
But Jim’s pride gets in the way, and he pushes too far.

Immediately, he’s in serious trouble: an escalating back-and-forth battle with a brutal menu of realworld consequences, including everything from prison to an early grave. And his AI foe proves able to hack and use just about anything attached to the internet as a weapon.
As their one-on-one fight explodes into an inconceivable global conflict, Jim must navigate dwindling options to save not just his own life, but humanity, from a desperate future…

The Woman in the Wood by M.K. Hill