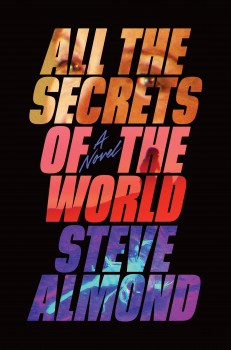 “The scorpion hunts while the rest of us dream. That’s why he knows all the secrets of the world.”

It’s 1981 in Sacramento and 13-year-old Lorena Saenz has just been paired with Jenny Stallworth for the science fair by a well-meaning teacher hoping to unite two girls from starkly different worlds. The unlikely friendship they form will draw their families into a web of secrets and lies, one that sends Lorena on an unforgiving odyssey through the desert, past the gates of a religious cult in Mexico, and into the dark heart of America’s criminal justice system.

A sweeping social novel, All the Secrets of the World introduces readers to a cast of indelible characters while illuminating the moment in our national history when the call for law and order became the dominant force within our public life. For fans of both Little Fires Everywhere and Breaking Bad, Steve Almond’s long-awaited debut novel is a propulsive tour de force–the sheer scope, moral complexities, and piercing insights mark a writer at the height of his powers.

Hide No Secrets by Lily Campbell

The Secrets We Bury by Mary Bush

What Can’t Be Hidden by Brandon Andress