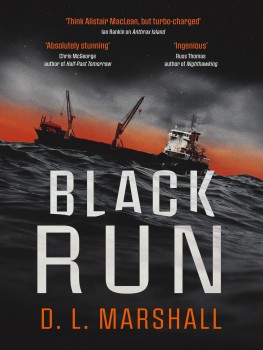 The epic second novel from the author of the acclaimed Anthrax Island.
John Tyler has a new mission: capture a heavily protected target from the Alps and smuggle him back into the UK in time for Christmas.
La Rochelle in the dead of night: Tyler boards the Tiburon, a rusting freighter crewed by smugglers and mercenaries, for the last leg of his journey. But he is short on time. His mark’s security team has pursued him across France, determined to retrieve their boss, and they won’t be deterred by an ocean. The race is on.

Tyler heads into the Bay of Biscay in a storm, with a pursuing boat snapping at his heels. But when his prisoner is found murdered inside a sealed hold on the ship, everyone on board becomes a suspect. In the flickering light of the Tiburon’s passageways there’s nowhere to run, but everywhere to hide.
Some might think the situation is spiralling out of control, but they don’t know John Tyler…

Perfect for fans of Alistair MacLean and Terry Hayes, Ronin meets Bond in this high-octane thriller that races from the French Alps to a creaking ghost ship in the Atlantic, with a locked-room mystery at its heart.

Last One To Die by Cynthia Murphy

Tell Me a Lie by Dana Killion