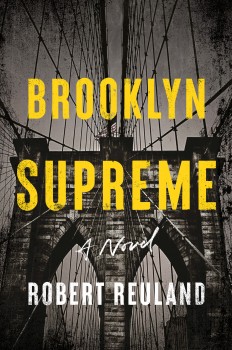 A hard-edged literary thriller about a racially charged police shooting, by one of “crime fiction’s most gifted writers” (George Pelecanos)

On a Brooklyn street corner, a police officer shoots and kills a young Black man, igniting a firestorm of protests and unrest, denials and excuses from cops, promises and apologies from politicians, and cries of hate and outrage from an aggrieved public. The police officer in question, Georgina Reed, is a rookie, fresh from the police academy, and she herself is young and Black.

Caught in the middle of this conflagration of law, politics, and race is the rookie cop’s unlikely defender, Will Way, her police union representative. Will does what he can for her, but soon the case becomes less about what really happened on that dark street corner and more about the larger forces in society. Will Way ceases to be merely defending a fellow cop in a criminal investigation and becomes a target of the investigation himself as his past spills into the present with all his hidden secrets and regrets.

While events reach back and forth through time and circle around New York City, Robert Reuland always takes the reader to the place he knows best, the world of crime and punishment centered on a building known as Kings County Supreme Court, which courthouse regulars call simply: Brooklyn Supreme.

The long-awaited third novel of Robert Reuland, Brooklyn Supreme is a clear-eyed exploration of the fault lines of class, gender, and race in America. It is also a nuanced portrayal of the family politics that affect fathers and sons and fathers and daughters. A standout crime novel by a writer with an undeniable gift, Brooklyn Supreme is a gritty and gut-wrenching read.

Deep in the Alaskan Woods by Karen Harper