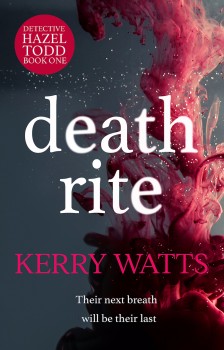 Their next breath will be their last.

Forty years ago, the name Rachel McMahon was synonymous with evil. After killing four men in the most brutal of ways, the world rejoiced as she was locked up.

Now Rachel has done her time, repented for her crimes, and is ready to live a quiet life back in Scotland under a new name.

But then the killings start again. As the bodies of fathers and sons appear on the streets of Perth, their deaths echoing those from Rachel’s murder spree four decades ago, DCI Hazel Todd and her squad are called in to track down a murderer taunting them at every step.

Could Rachel really have reformed – or is a copycat killer trying to finish what she started? And as the murders get closer to Hazel, it’s a race against time to stop a psychopath with their own twisted agenda…

The Girl They All Forgot by Martin Edwards

The Last Testament of Crighton Smythe by Gavin Gardiner