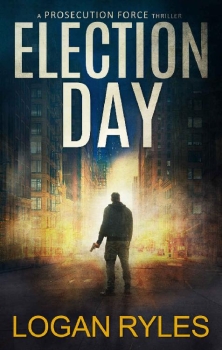 In less than a week, America will select her new president.
Three candidates are tied in a dead heat.
But one of them is about to step into a lethal trap.

From twenty-four hundred yards, an invisible shooter takes an impossible shot. As the gun smoke clears and panic erupts, the Free World is once again threatened with the prospect of chaos.
Pulled out of a blissful family vacation, Reed Montgomery watches the carnage unfold on cable news, as helpless as any other American.
But then the phone rings and Reed’s Prosecution Force is called into action.
Because the shooter is still out there, and he’s already picked his next target.
Unless Reed acts quickly, he’s going to strike again.

The Canal Murders by Christina James

Monkey in the Middle by Loren D. Estleman

Death in Dalvik by Michael Ridpath