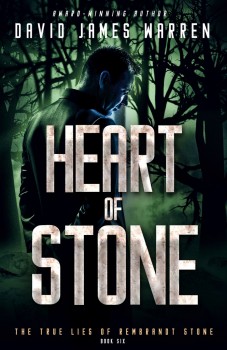 Rembrandt Stone has nothing left to lose…or does he?

Detective Rembrandt Stone doesn’t recognize himself in the mirror. Doesn’t recognize the world he’s returned to. Doesn’t even know his own name. But he knows one thing…living in this world is impossible.

Good thing he has an ally—an unexpected friend from the past. And together, they just might be able to unravel the entire mess. But first…Rembrandt will have to return to the past one final time and intercept himself before he makes a lethal mistake.

Time has outwitted him. It’s time for him to outwit time. Can he reconstruct a past he just destroyed or is there nothing left of his world to save?

The explosive ending to the True Lies of Rembrandt Stone!

My Heart Is a Chainsaw by Stephen Graham Jones

Past Never Dies by Cate Clarke