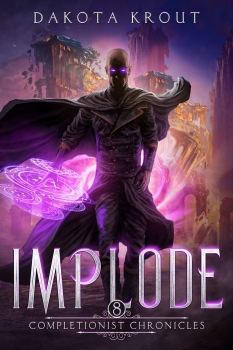 The Dwarves want to fight. They’re ordered to escape. Turtling up is the best of both worlds.

Joe and humanity as a whole messed up pretty badly, managing to get some of the most important people from both the Elven and Dwarven races killed. Now the war is escalating to unprecedented levels, and only one side needs to worry about being slain. With the attackers knowing they can get right back up after dying, they are throwing themselves against their centuries-long foe without caring for the consequences.

As the death toll rises, there’s still hope for Joe and the people that he chose to align himself with. His tiny Hamlet is hidden away from the Elves, so the Ritualist gets a quest to escort the core of the Dwarven Oligarchy to safety: their History, and those that lived it. If he can manage to save even a few as the Dwarven Oligarchy begins to Implode, the race might one day have a chance to regain their former glory.

The Hidden Graveyard by Marc Layton

Tell Me an Ending by Jo Harkin