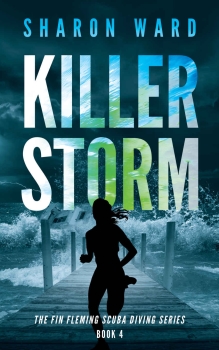 Category 5 Hurricane Willard is barreling toward Grand Cayman, but Fin Fleming, acting director at RIO, a world-famous oceanography institute, has everything under control.
Or so she thinks, at least until she realizes she forgot to send her stepbrother Oliver’s new boat to drydock along with the institute’s other boats. She risks her life to move his boat to safety. Then after the storm, while assessing the boat for damage, she makes a horrifying discovery that sets off the disturbing chain of events.

Maddy concentrates on an off-island project while Newton and Dane are still struggling to figure out their relationships with her. Benjamin suffers injuries during the storm, but Doc is around to bring him back to health. Stewie and Chaun work on rebuilding RIO, while Fin and DS Dane Scott go after the bad guys.
And Fin is puzzled by Oliver’s erratic behavior. He’s flipping every few minutes from his usual sunny self to a snarling, angry shark snapping at everyone around him—especially Fin.

The usual fun stuff is happening too. A once in a lifetime chance to pilot a multi-million dollar personal submarine. Rosie, the American Pygmy octopus, and Suzie Q, the Southern Stingray, are back, both doing their things. Plus there’s a crazy free-range rooster named Chico on the hunt for treats and bad guys.
And then there’s Liam. Always Liam.

The Night Shift by Alex Finlay

The Missing Woman by Georgina Cross

While Justice Sleeps by Stacey Abrams