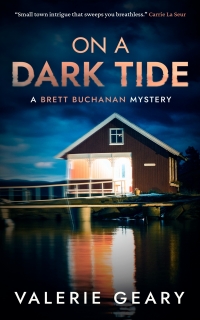 Someone in this town is keeping a deadly secret.

Brett Buchanan never imagined herself returning to Crestwood, Washington where her sister was murdered twenty years ago. But when she’s offered a detective position with the local police department, she decides to take the job. Between figuring out how to fit in as the squad’s first female detective and caring for her grandmother who is showing signs of dementia, Brett doesn’t have much time to think about her sister’s cold case. Then she receives a message from a man claiming to have information about the decade’s-old murder. Before she has a chance to talk with him, his body washes up on a local beach.

Truth always comes at a price, but Brett won’t stop searching. Not until her sister’s killer is finally brought to justice.

The Necklace by Matt Witten

Devils and Saints by Jean-Baptiste Andrea

The Late Train to Gipsy Hill by Alan Johnson