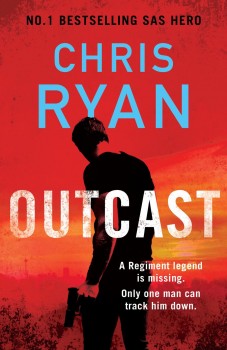 A REGIMENT LEGEND IS MISSING.
ONLY ONE MAN CAN TRACK HIM DOWN.
From No.1 bestselling SAS hero Chris Ryan comes OUTCAST, a brand new action thriller ripped straight from the headlines.
After single-handedly intervening in a deadly terrorist attack in Mali, SAS Warrant Officer Jamie ‘Geordie’ Carter is denounced as a lone wolf by jealous superiors.

Now a Regiment outcast, Carter is given a second chance with a deniable mission: locate SAS hero-gone-rogue, David Vann. Vann had been sent into Afghanistan to train local rebels to fight the Taliban. But he’s since gone silent and expected attacks on key targets have not happened.

Tracking Vann through Afghanistan and Tajikistan, Carter not only discovers the rogue soldier’s involvement in a conspiracy that stretches far beyond the Middle East – but an imminent attack that will have deadly consequences the world over . . .

No Fear by Casey Kelleher

The Streets of Melbourne by Stephen Kasa