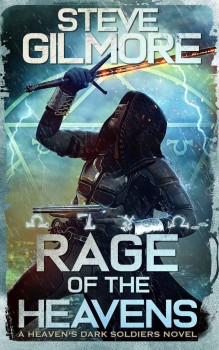 It’s the end of the world as we know it. And Dean Robinson feels fine.

To avert certain apocalyptic fallout, Dean Robinson, Seventh Deacon of the Seventh Line, made a deal with the Devil. Literally.

And after that backfired in a truly spectacular fashion, Lucifer freed the Fallen Watchers from their eternal bonds in the depths of Tartarus and subsequently sent legions of man-eating Nephilim giants on a global binge fest. Not exactly Dean’s best day.

With the Heavens ablaze as Lucifer and his cronies slug it out with the archangels, Dean and the team scramble to prevent the ensuing Book of Revelations quality maelstrom from smacking headlong in to the Earth. Piece of cake…

Gilmore’s third book in the Heaven’s Dark Soldiers series delivers the knockout punch fans have come to expect. RAGE OF THE HEAVENS is a fantastical thrill ride filled with twists that will keep you on the edge of your seat and reaching for another beer.

Fences of The Light by J. D. Cortese