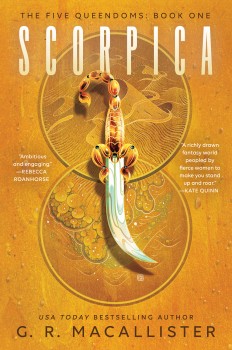 A centuries-long peace is shattered in a matriarchal society when a decade passes without a single girl being born in this sweeping epic fantasy that’s perfect for fans of Robin Hobb and Circe.

Five hundred years of peace between queendoms shatters when girls inexplicably stop being born. As the Drought of Girls stretches across a generation, it sets off a cascade of political and personal consequences across all five queendoms of the known world, throwing long-standing alliances into disarray as each queendom begins to turn on each other—and new threats to each nation rise from within.

Uniting the stories of women from across the queendoms, this propulsive, gripping epic fantasy follows a warrior queen who must rise from childbirth bed to fight for her life and her throne, a healer in hiding desperate to protect the secret of her daughter’s explosive power, a queen whose desperation to retain control leads her to risk using the darkest magic, a near-immortal sorcerer demigod powerful enough to remake the world for her own ends—and the generation of lastborn girls, the ones born just before the Drought, who must bear the hopes and traditions of their nations if the queendoms are to survive.

Leaves May Fall by Carissa Hardcastle

Kingdom of the Cursed by Kerri Maniscalco

To End in Fire by Eric Flint and David Weber