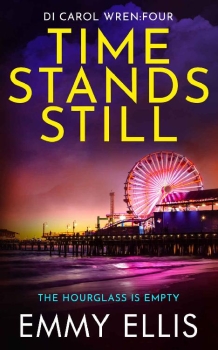 There are moments when time stands still. Madeline’s husband ends their marriage, leaving her to care for their sick daughter, Poppy, and she’s determined to get justice for being abandoned. She’s intent on killing, and no one can stop her.

Sofia also has murder on her mind, desperate to get rid of the redheaded women who stole the man in her life. She’s been planning her spree for a year, then she’ll disappear to London, safe amongst the crowds.
Nathan is a pickpocket and killer, stuck in Scudderton with no exit—until he makes his escape work. He’s free of his mother and the town, but is he free of his demons?

Desmond is a trained assassin, and someone is going to die. His target is getting in his boss’ way so must be eradicated. The thing is, Boss doesn’t know Desmond has his own agenda…
Four people converge in a case that appears simple—someone is offing residents with items from a toolbox. As always, DI Carol Wren and her team are determined to solve the crimes…but are they really all connected?

Love and Other Lies by Ben McPherson

The House Fire by Rosie Walker

Her Last Affair by John Searles