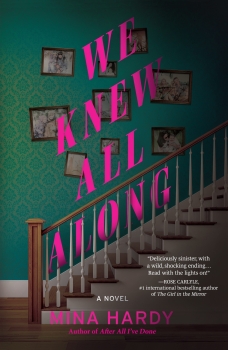 Writing as Mina Hardy, New York Times bestselling author Megan Hart, delivers a twisted tale of domestic suspense where no one is what they seem—and the skeletons in the closet are all too real.

Blame the booze, her shaky marriage, her troubled son, or a thousand other things. Jewelann Jordan has one thing on her mind when she attends her class reunion, and that’s making sure her old crush Christian Campbell sees exactly what he lost all those years ago. A late night, a hotel room, a rekindled flame that burns even hotter than it did back then. What could go wrong?

The night with Christian isn’t the first secret Jewelann has kept from her husband Ken, so one more shouldn’t be much harder–except that Christian shows up without warning, seemingly determined to do his best to mess up Jewelann’s life in any way he can. Worse than that, he seems to have his sights set on charming her son, Eli, and befriending her husband. Revenge isn’t so sweet when it bites you back, but Jewelann is determined to keep Christian from ruining everything she’s worked so hard to keep safe, including her son.

Fighting to keep it all from spiraling out of control, Jewelann discovers Christian is not the man he claims to be. When darker secrets emerge, even closer to home, Jewelann takes the chance to turn the tables on him. The more Jewelann digs for the truth, the uglier–and the deadlier–it gets.

How Did I Not See by Kally Haynes

Any One of Us by Martyn Ford

The Moorland Murderers by Michael Jecks