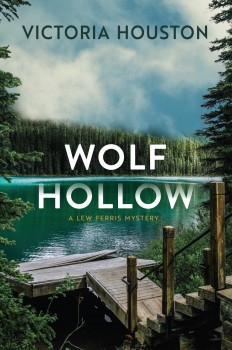 Murder stalks the Wisconsin northwoods in a gripping novel from the author of the acclaimed Loon Lake mysteries.
It’s mid-May in the tiny northwoods Wisconsin town of Loon Lake, and the fish are biting. Walleye’s not the only thing on the hook. There are rumors that a precious vein of nickel and copper is buried on the property of wealthy Grace McDonough, and the drilling is about to begin. But not if environmentalist Pete Ferris can help it.

When Grace’s 24-year-old son, Noah, is caught in a sordid sex crime, police chief Lew Ferris makes the arrest. But a day later, Lew is stricken when her brother Pete turns up dead, a bloody pry bar found in the woods nearby. Then, Grace’s body is discovered in a car at the bottom of a river–and Noah has vanished. Lew puts out a statewide APB, but before long, Noah is also found murdered on the McDonough property.
It’s beginning to look like mother and son were killed by the same person. And when Lew learns that her brother had planned to file a lawsuit to prevent drilling for the sulfide mine, a key piece of the puzzle suddenly falls into place.

Lew is beginning to close in on the truth. But has the killer set his bait again, angling for his biggest catch yet?

The Promise of the Pelican by Roy Hoffman

A Flicker in the Dark by Stacy Willingham

Thirst for Sin by Kennedy Layne